Besøg i et land i krig 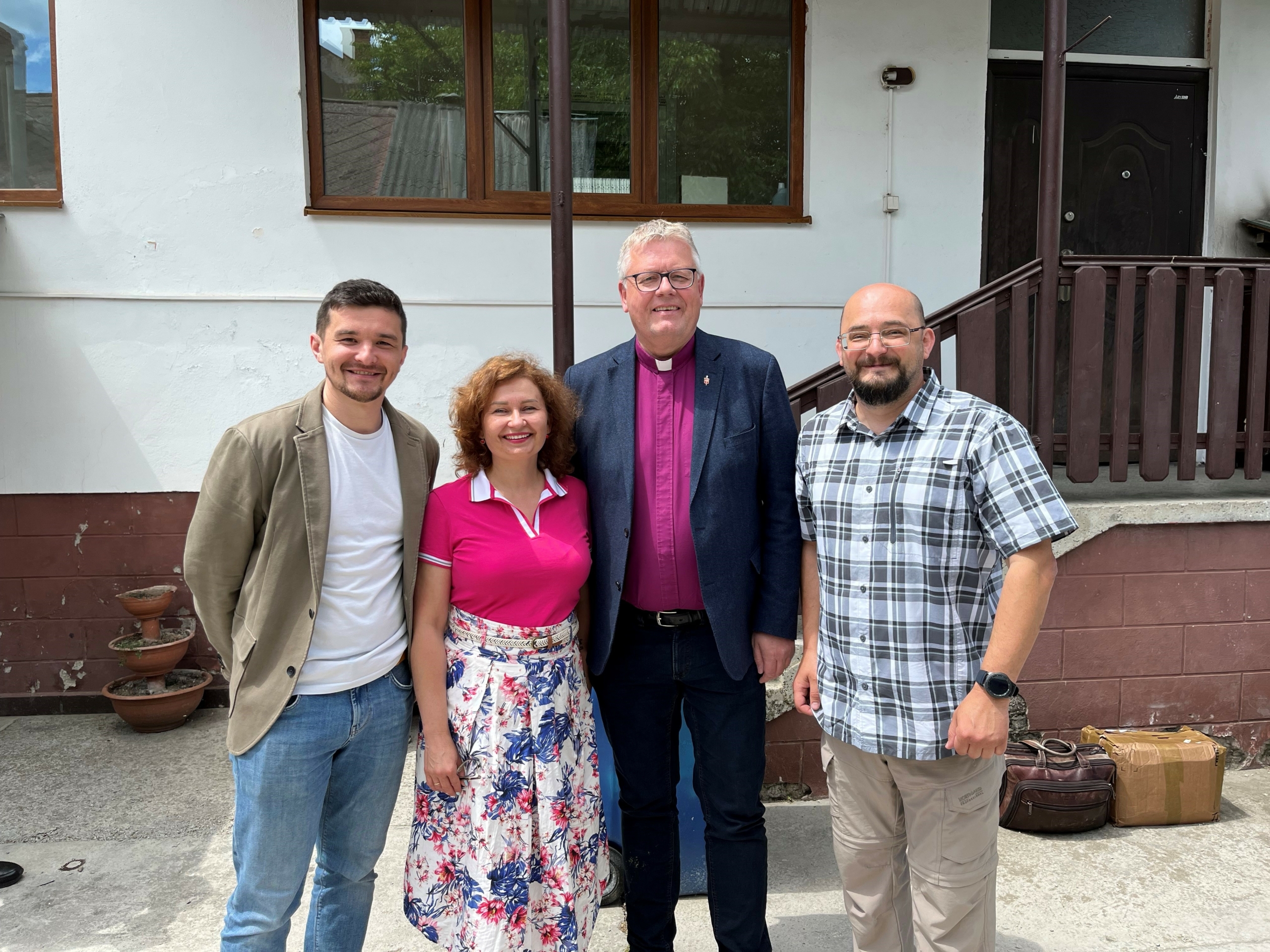 Load a dishwasher, 5 tables, food supplies, printer paper, coffee makers, toasters, a bunch of Upper Room devotionals and 7 grown United Methodist along with driver and coffee expert Istvan Pasztor, and you have an absolutely jam-packed minivan.

This was my first trip to Ukraine as the newly assigned bishop to the Ukraine and Moldova Provisional Annual Conference, I had hooked on to a trip led by the Europe secretary of Global Ministries Üllas Tankler, who was traveling with Kathrine Hills Uzoka and Jack Amick (UMCOR) and Joey Butler, Francisco Litardo and Mike DuBose (UMCOM).

Istvan, who has made several trips into Ukraine during the war, had picked one of the smaller border crossings taking us over the Tisza River on a tiny ferry and then after some conversations and checks at the border into Ukraine. We were headed for Uzghorod in the Transcaparthia region in the southwestern part of the country.

Having only communicated through Zoom and phone, it was a delightful moment to be able to greet and hug the fellow Ukrainian United Methodists – pastors, leaders and volunteers under the leadership of DS Oleg Starodubets were there to greet us at the Uzghorod UMC.

The United Methodist Church in Ukraine is made up of only ten churches and 350 active members. Nevertheless, the church by the grace of God is accomplishing amazing things.  We run several refugee shelters – in the church in Lviv close to the polish border, in a secondary school in the village Onokivci and on the 9th floor in a former newspaper and publishing facility in Uzghorod. Furthermore, several churches have refugees living and sleeping in the sanctuary, only putting the matrasses aside when there is worship or other meetings.

The many Ukrainian refugees, more than 8 million have left the country, and the most likely higher number of internally displaced people literally have millions of stories to share. They are heartbreaking stories of loss, suffering, separation, fear and despair – and also some encouraging stories of survival, hope, joy and dreams of a peaceful future.

Elena was 7 months pregnant, when she left from Kharkiv with her husband Andrei and their two- and seven-year-old children. They went through the Kramatorsk railway station only a few days before it was attacked by Russian missiles and 59 were killed and 110 wounded.

After their arrival in Uzghorod, Elena gave birth to a little boy, they named him “Bogdan”, which means “gift of God”

Ludmilla and Costa fled from Kharkiv with their children Camilla and Artum in the early days after Russia attacked Ukraine. Their home is still intact, and they hope it still will be, when the war is over.

Anna and Michail left Kharkiv with their son Nicolai – Michail is a trained psychotherapist and helps other refugees at the shelter to deal with their traumatic experiences.

Oksana fled with her 17-year-old son from Kupansk to Kharkiv and then to Uzghorod. Crying, she showed me a photo of what used to be her apartment, there is nothing left to come back to. Oksana had not had contact with her parents in Kharkiv for several weeks – we prayed that she would be able to connect with them, and later the same day, Oksana was able to have a phone conversation with them. Now a couple of weeks later, Oksana’s parents have made it to the shelter in Ozghorod, and they are safe.

The connection with God in prayer can like nothing else bring comfort and hope in difficult circumstances. I was given the opportunity to pray with each of the persons, I talked with at the shelters, and there was a deep sense of God’s presence in those moments.

After my US travel companions had left to go to Romania, to visit refugee centers there, I stayed for another couple of days to have the opportunity to visit churches and to begin to get to know pastors and leaders in the church.

We had passionate worship on a Tuesday morning in the Roma congregation in the village of Serednje. We worshipped and shared communion in a packed church in Kamyanitsa, after the matrasses of the refugees staying there had been stacked in another room. We talked about the church, the country and the culture, and not least the war and how it affects life and families in so many ways. We talked about hope rooted in God’s promises and in the strength in knowing that the final word in this world belongs to the risen Christ. And we prayed.

Many have asked, did it feel unsafe? It didn’t. Off course, you could see soldiers in several places, and there are manned machinegun positions protecting the infrastructure, however, at least for now the Transcarpathia region has only been hit once by a Russian missile. There are many refugees, the population in the area has more than doubled since the war started, and many are passing through on their way to Romania, Slovakia or Poland.

Since I left the attacks have intensified, over a weekend almost 200 missiles were sent aimed at targets In Ukraine – some were shot down by the defense system but far from all. Many civilians have been killed since the war started in February, apartment buildings have been hit, and only a few days ago more than 20 people were killed and many injured by an intentional Russian missile strike against a shopping center in Kremenchuk. People are deeply affected by such reports about civilian casualties, destruction, violence and the ongoing information about the numbers of soldiers who have died or are wounded. Many refugees are dealing with the traumatic experiences, they have had, they worry about relatives still staying in the war zones and about relatives, who are in the army. Nevertheless, I heard many speaking about victory and driving the enemy out, and I heard many speaking about rebuilding the country.

These months of meaningless violence, destruction, death and hatred will take years heal – right now our prayer must be for peace, for the protection of the many innocent victims of this terrible war, and for strength for those doing their utmost to comfort and to help.

I am grateful for the United Methodists in Ukraine, for their love, dedication and servant heart – I am humbled by their courage and their tireless efforts to offer protection and care for those in need – these Ukrainian United Methodists are really true to Christ’s calling under extremely challenging circumstances. I look forward to going back soon.

Bishop of the Nordic, Baltic and Ukraine Area United Methodists in Eastern Europe have been welcoming Ukrainian refugees since the beginning of Russia’s invasion of their country. See United Methodist hospitality and ministry in action through the lens of UM News photographer Mike DuBose.
Pastor Mai-Brit Tvilling fylder 60 år